Sunday marked two months since we closed on our house. We feel great about all the projects we've already tackled. But after living without anything on our walls since moving day, I was itching to hang something yesterday.

Naturally, I scratched that itch. Out came the laser level, hammer and hanging nails. Out came the boxes of frames that we had yet to unpack. Out came the camera to document it all! Yes, there's still baseboard to install, trim to paint, vent covers to install, speaker wires to run through the ceiling, blinds to replace--I could go on and on, but you get the point. There are other things I could attend to. But instead, I fussed over hanging art. 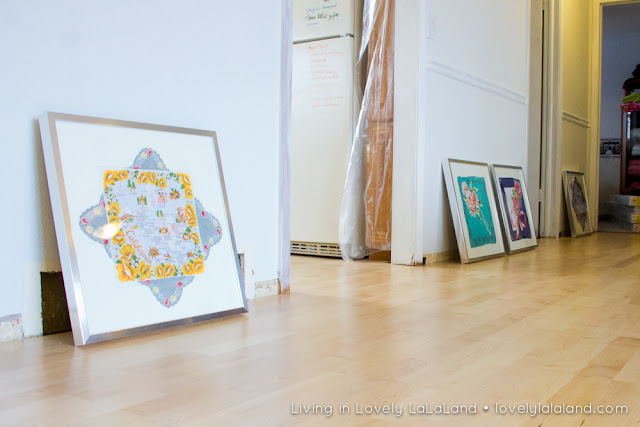 First I grabbed my collection of framed handkerchiefs and set them up along a wall in the main living area/hallway. 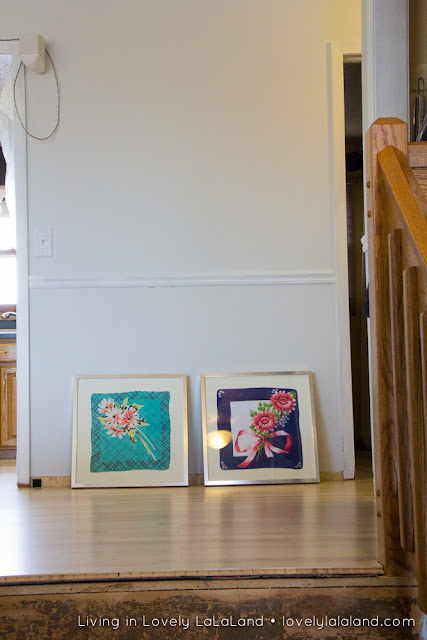 I liked this arrangement, but wasn't sure I wanted these hankies to be the first thing you saw when you came up the stairs from the entry landing--the first thing guests saw when they walked in our front door. (Did I mention we have to finish the new floor's edging around the stairs? Ignore the ugly, mmmkay?) 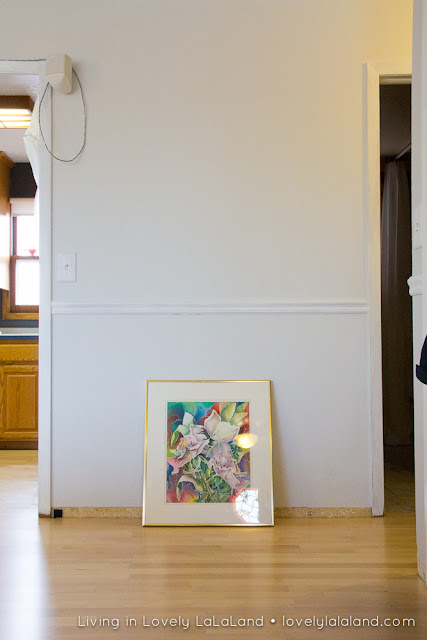 I picked up the handkerchiefs and put up this framed watercolor--my first-ever piece of professional, original art that was a gift from my parents and hung in my bedroom as a kid.

I liked it. So I let it chill a while, leaning against the wall below its potential hanging spot. 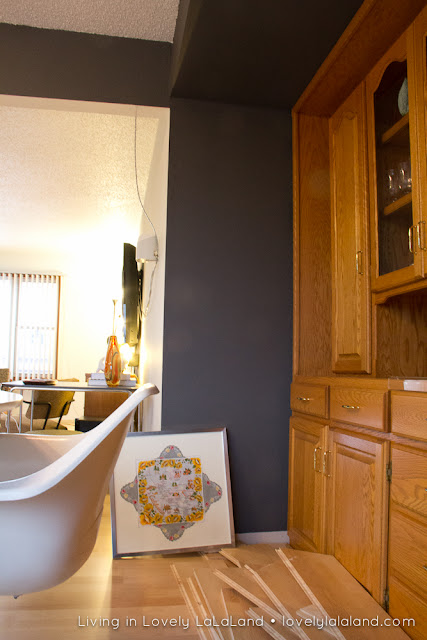 Then I walked around the living room and kitchen with the framed hankies. Hang them on either side of the hutch? Maybe. 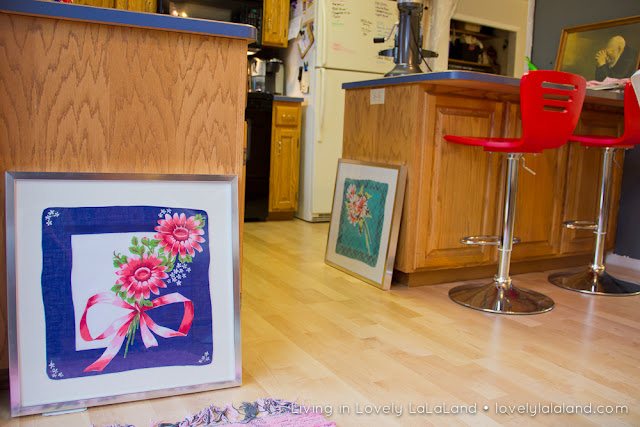 Hang them in the kitchen--maybe on the two blank sides of the cabinets? Maybe. As I questioned the position of the pretty vintage textiles, I was also trying to figure out where to put the "praying man" print. That's him resting on top of the countertop on the right side of the above photo.

I hemmed and hawed a bit longer before deciding to be like Nike and just do it. 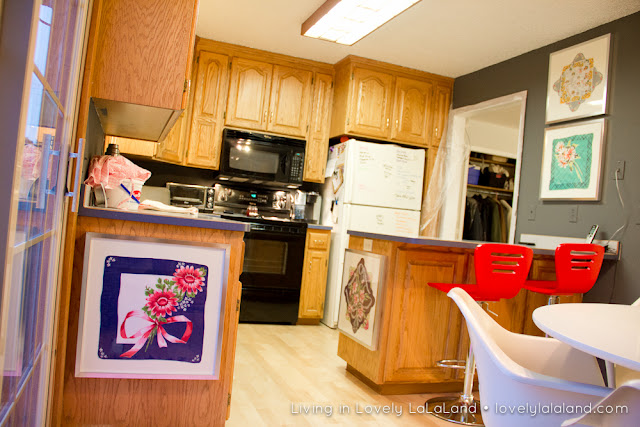 A short while later, the first frames were up! It was nice to finally have something on the walls...and, er, cabinets. 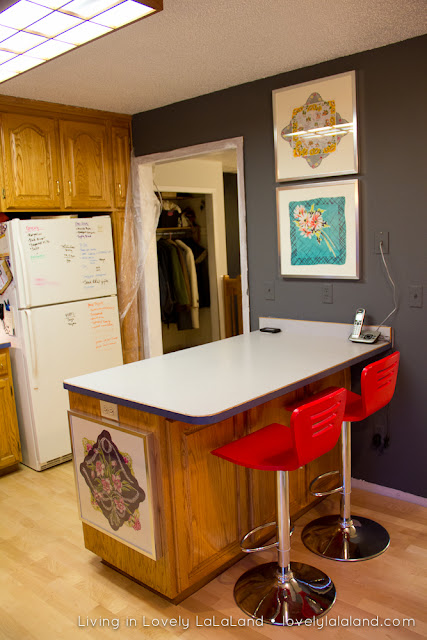 I wasn't sure of having something on the ends of the cabinets, but so far so good. Mike thinks I like that the frames cover the oak.
I haven't told him he's right. But I didn't say he's wrong either.

We also noticed how the silver frames tie into the chrome on the stools. It's always good to have things that relate to one another in the space. 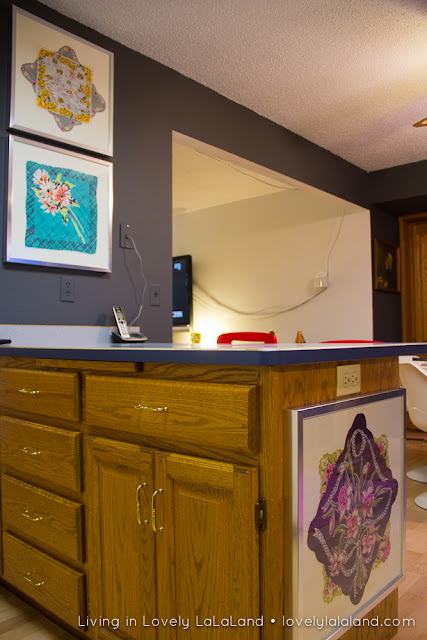 The triptych effect of the three frames is also a happy accident. I'm a fan of odd numbers when decorating, so having three frames in a line is more pleasing to my eye then just two.

And you may notice, we ended up putting the praying man on one of the small walls on the side of the built-in hutch. (See him way in the background of the photo above?) Now we need to find something to hang on the wall opposite him to balance it out a bit. 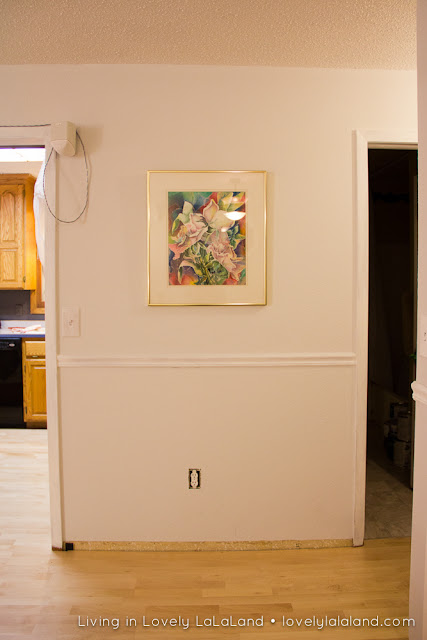 After all was said and done in the kitchen, I hung the watercolor. Art in two rooms--I call that progress!