While I still don't have any photos of our new place to share, I'll let you in on a little bit more about what we're thinking about for our new home. I'm calling the direction we're going "Modern Scandinavian" which is highly unimaginative since we're trying to combine American mid-century modern with Scandinavian design. Ah well, I'm hoping the execution makes up for the lack-luster title. 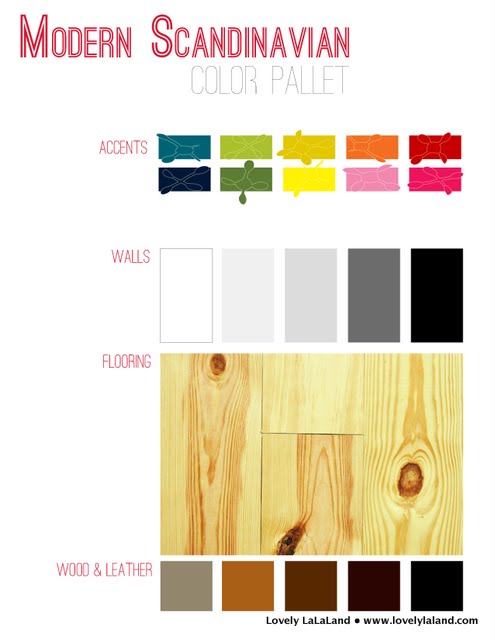 And now for some explanations--by the way, I'm going to address them out of order from what's shown above. I know, such a rebel.

Flooring: As you can see, we're thinking of doing light wood flooring throughout--either pine or maple but lately we're leaning more toward pine. There's something uniquely Nordic about it, no? The house currently is mostly carpet or linolium. While they're fine for the near future, one of the first things we're planning to do will be replace the floors. My dust allergy makes living with carpet virtually impossible.

Walls: As I mentioned in this previous dream session, we're thinking we'll stay monochromatic with our wall colors. I'm planning to paint all the trim in the house a nice bright white. It'll turn the rooms into modern galleries for the objects within. We're also thinking we'll incorporate more gray tones in with metal and concrete pieces. Maybe a concrete counter or two?

Wood & Leather: We want the house to have a natural element to it, as most Scandinavian homes do. We'll incorporate reclaimed wood, natural fibers and leather to cozy-up the stark walls. There are also some oak kitchen cabinets that we'll leave as-is for the time being (but that decision is another story.)

Accents: While we both like the idea of clean and modern, we're also big fans of color. Our color will come in with accent pieces--furniture and accessories mostly.

So there it is; our all-encompasing plan for casa #2. While we know this won't happen right away, or even very quickly for that matter, we're excited to get settled and started. We'll take it all one step at a time and as our budget allows. But at least we have a direction to follow.