How we found a home in an oil boom town

Before I go into the details of how we found our new home, let me start with some background into our situation. 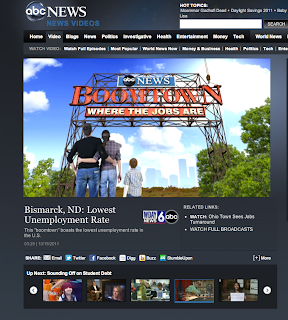 North Dakota has a booming economy. As Dianne Sawyer said last week, "It's like a dream of America as we want it to be." See for yourself in this video, which features the city with the lowest unemployment in the nation: our state capital, Bismarck, North Dakota.
*I tried embedding the video into the post--unsuccessfully. Visit the story here.

The issues in this video aren't unique to Bismarck. Dickinson, located a little over an hour west, has an identical situation--population boom, housing boom, employment boom, oil boom.

Husband talked about taking advantage of the opportunities in the oil boom for almost six months before he took a job five hours west of our home in Jamestown last July. He rotated weekly between the job and time off--one week in the oil field, one week at home.

It was hard. Really hard. Since we met four years ago we've spent little time apart. We weren't used to going a week without seeing each other. And while the job was husband's foot in the door and served as an experience builder, staying there wasn't his long term goal. His new job, the one that's moving us halfway across the state, is a better fit for him professionally and personally. And while I'm a little apprehensive about being in a new town that's further away from our family and friends in eastern North Dakota, I'm thrilled that we'll be living under the same roof every day of the week.

If you're still reading this novel, give yourself a pat on the back. Thanks for sticking with me. On to the story of our house hunt.

Monday, four days after accepting the new position, husband traveled to Dickinson in hopes of finding an apartment. We wanted to take this transition slowly, with him splitting his time for the first six months between the apartment during the work week and home on his days off. I'd stay home--slowly getting it in immaculate condition before putting it on the market to sell. I'd also stay at my current job and work on securing another in our new city. We'd sell our house here, move our boxes and me west after selling our Jamestown house. The apartment would be home while we searched for a new place in the boom town. That was the plan.

Mike got the list of all apartment rentals in town. He called them all. Guess how many apartments were available to rent...One. A one bedroom for way too much money each month.

And just like that, plans changed. He found a realtor and looked at the three available houses in our price range that day. One was a clear favorite. He brought me out to look again that Friday. Only one of the houses he looked at four days earlier was still available. Luckily, the available house was Mike's favorite. We looked at it and two other homes.

Mike's favorite was also mine. The list of things we like about it is long; four bedrooms, two baths, fenced back yard, outdoor deck and patio, a two-stall garage, a good neighborhood...to name a few. *In fact, I was so wrapped up in looking around I didn't take a single photo when touring it. Sorry for the photo-free post but don't worry--pictures to follow. In addition, the house had been listed a long time considering the booming market--the price had dropped that week. We put in an offer that afternoon and our offer was accepted!

It was time to focus on selling our current home as fast as possible. But that story (the one where I explain how we marketed our house for sale) can wait until next time. Don't worry...it'll be worth the wait.