How we got our stove

As I said here, there's a story behind how we got our beautiful stainless steel stove. Here it is:
Friday, April 2, 2010: Good Friday. I had the day off from work and spent most of it at our "new house" Mike was living in and I'd be moving into after our wedding in less than two months. We were busy making improvements around the house--especially in the bedrooms--namely removing the carpet, refinishing the floors, and painting the walls. Most of my free time was spent on DIY, wedding plans, and working out (the fear of the wedding photos was kicking my diet and exercise regimen into overdrive. Too bad that fear ended after the wedding...ha.) But I was also enjoying learning the art of cooking. Admittedly, I knew most of the basics of cooking and baking thanks to my Mom, Grandma, 4-H and home economics classes in high school. But I had never had a need to cook and was therefore unpracticed. The recent necessity to provide food for myself (no more college dining hall) led me to discover the fun behind cooking and baking.
We were spending Easter Sunday with my sister's family. I was bringing this white chocolate lemon cheesecake for dessert. I bought all the ingredients and started making it late in the Good Friday afternoon.
The crust pre-baked while I mixed up the oh-so-amazing filling. 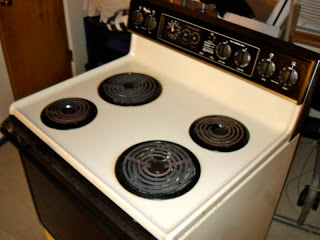 I was a little nervous about the oven, because we had nothing but trouble with it since buying the house four months earlier. Sometimes it was too hot, sometimes too cold. We couldn't trust anything to cook evenly in the oven or on the burners. It was on our radar to replace...eventually.
Much to my surprise and delight, the crust baked well. Now it was the tricky part: the slow steamy cheesecake bake. I said a little prayer, shut the oven door and set the timer. I planned to stay close--not leaving the kitchen during its hour bake time. You know, just in case. I cleaned up my baking mess and more, organized a few cupboards and read from a cookbook, occasionally checking the dessert. All was still well, and we were over half-way there! Then, I heard the buzzer on the clothes dryer go off in the basement laundry room. Should I leave the kitchen to put new loads into the washer and dryer? Feeling confidant, I headed downstairs to do a quick laundry switch. I was gone ten minutes--max.
When I came back up and peeked at the cheesecake, this is what I saw: 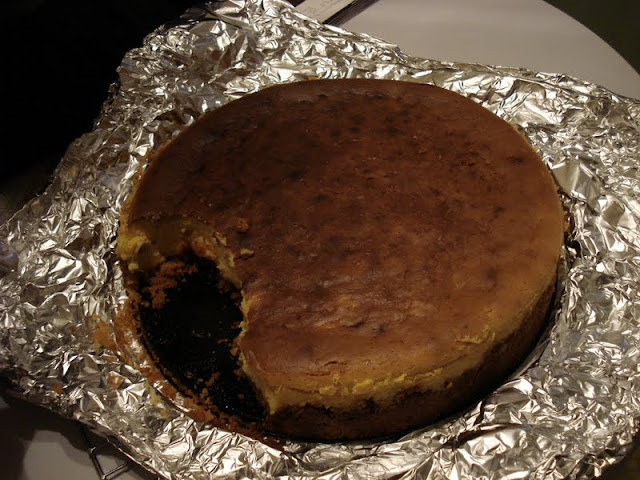 (Sidenote: the chunk missing was curtesy of Mike and his brother, who thought the burnt treat was still just that--a treat. Thank goodness for boys who eat almost anything!)
"Nnnooooo!" my agonizing scream turned into immediate tears of frustration.
How could I have been so silly to leave? Why hadn't I purchased an oven thermometer to keep better track of the temperature since the unit's built-in one clearly didn't work?
Mike came running up from the basement TV room, asking what was wrong as he bounded up the stairs. I'm not sure he understood the whole story between my angry sobs, but he of course knew what was wrong as soon as he saw the cheesecake.
"I just need to be more careful," I tearfully said into Mike's shoulder after a few minutes of lamenting the cake that couldn't be served on Easter. "I'm going to buy the ingredients and an oven thermometer and try again tomorrow when I come back over here."
"You don't need a new thermometer," Mike said. "You need a new oven."
"We don't have the money for that right now," I replied quietly, taking my head off his shoulder to look up at his face. Was he serious?
"You don't, but I do. We can use the money I've been saving up for the speaker system." (Determined to have the "theater" of his manly dreams, Mike had already purchased a gigantic television and was planning to complete the space by purchasing the sound system before he said "I do" and he was no longer living the bachelor dream.)
It took me a few minutes to realize he was serious and for him to convince me it was not only a good idea, but an absolutely necessary one.
We immediately got online to look at some options and prices at different stores. We tossed around the idea of road-tripping the next day to get the best deal, but thought we'd check stores closer to home first. We knew what we wanted: a large convection oven and glass cooktop. Stainless steel would be nice, but not necessary.
At 7 o'clock in the evening of Good Friday, we walked into our small town's Sear's Appliance Store (not to be confused with the more commonly seen Sears Department Store, our Sears only sells appliances, lawn equipment, gym equipment and the like. It's much smaller.)
We, of course, were the only customers in the store, and therefore received undivided attention from the salesman. He showed us the options that met our qualifications. I think there were three that somewhat fit the bill, but one stood out from the rest. And it was within our price range. We arrived home with the stove less than an hour later. 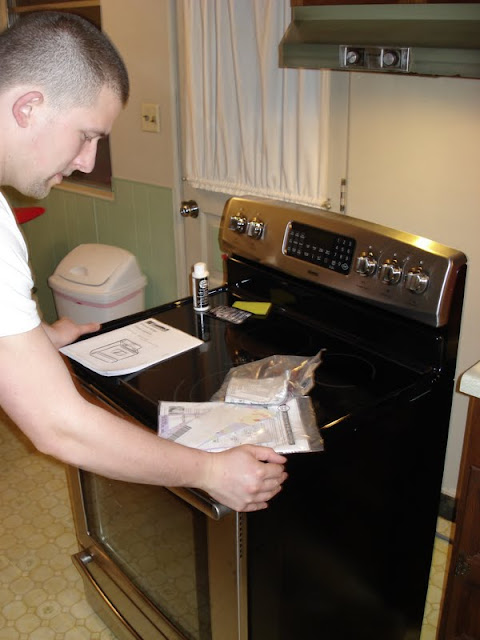 The old stove was removed, the new one installed, and we were pouring over the manual less than an hour after that. 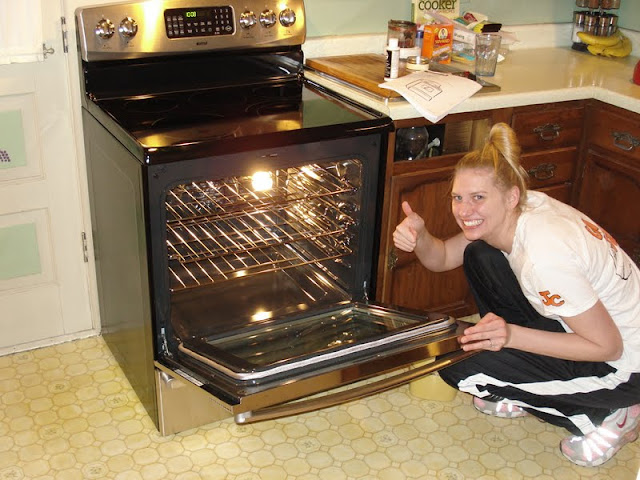 After all was said and done, I called my Mom to tell her the story.
"That boy's a keeper!" she exclaimed. "I now have no doubt he'll take good care of you for the rest of your life."
It was a funny comment, but I understood what my protective mama meant. Any 20-something, unmarried man who is unselfish enough to--at the drop of a hat--take the hard-earned money he'd been squirreling away for himself and use it for something more critical for someone else is worthy of his in-law's trust.
And my sister (along with her in-laws) raved about the new cheesecake I arrived with on Easter morning.
at 11:10 PM