There's been some shuffling and shifting going on in our front room. Many things have taken new residences...

But before I show you all the changes we've made, let's revisit the former layout. 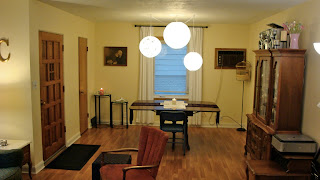 Before: The dining area was closest to the front door (and furthest away from the kitchen. 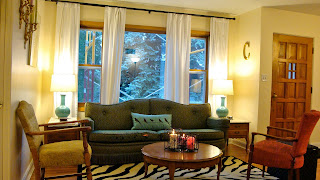 Before: The living area was in front of our picture windows... 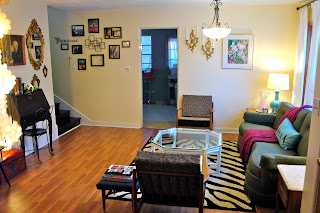 ...and next to the kitchen doorway. We had our coffee table almost under the hanging fixture. Though not enough under it for us to avoid knocking our heads when standing up from the couch. Ouch. 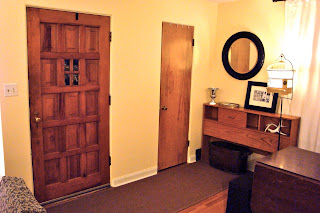 Before: An old storage headboard served as a front entry table. It was a bit wide for the space, which didn't bother me at first. It eventually bothered me lots. Crazy lots.
And Now: 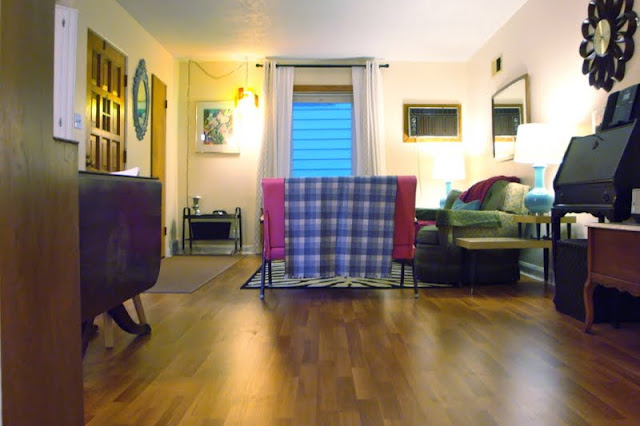 (FYI: I took all of the following photos on the longest day of 2011 expecting to have hours of sunlight helping make pretty photos. Too bad for North Dakota, it's also the rainiest day of the year. Dark skies create dark photos with terrible white balance. Bummer.) 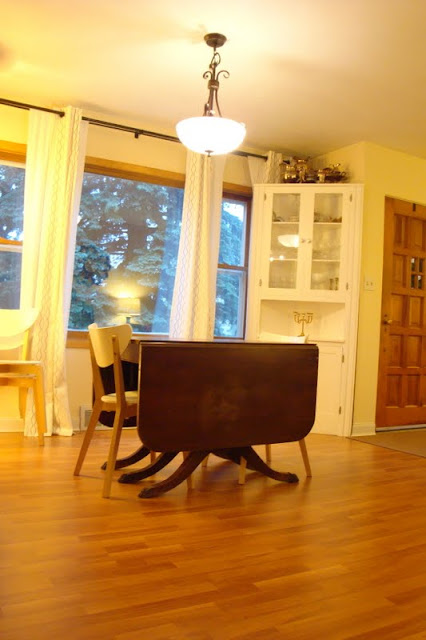 Notice anything different in the last two photos? Like--oh, I don't know, maybe that we swapped the locations of the living and dining areas?
You did?
Good! :) 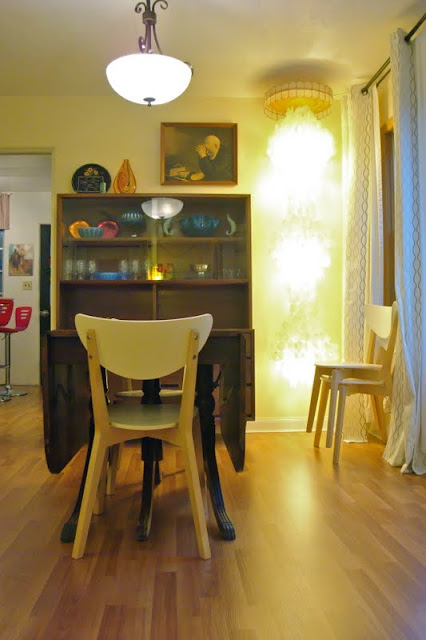 It makes much more sense (and prevents unnecessary head trauma) to place the dining table under the hanging light. 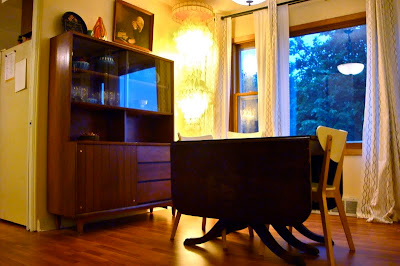 There's now open access to the picture window curtains--they're easy to open and close, instead of tucked behind the sofa. 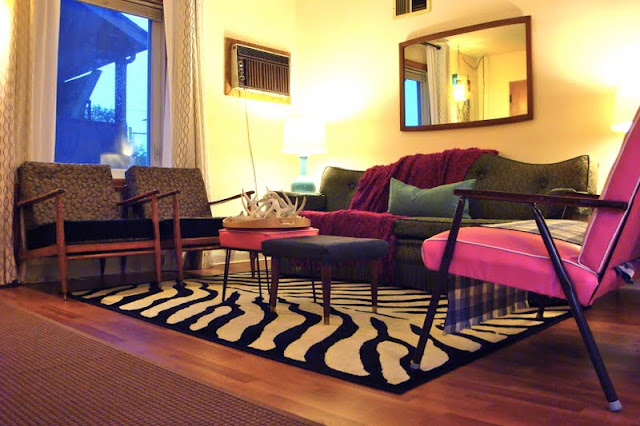 And having the sitting area close to the door is a fantastic change. 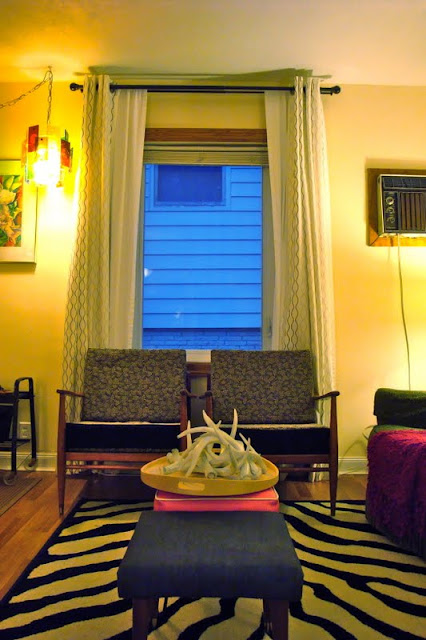 We were a little unsure of how the new arrangement would be, especially in the living area. Handsome hubby was especially concerned that it would feel a bit closed off and shoved in the corner. But happily, it doesn't. In fact, the tall window on the end of the room--now behind the danish modern chairs--offers enough light. I admit, the view of our neighbor's siding is less than ideal. But, hey, we'll take it! 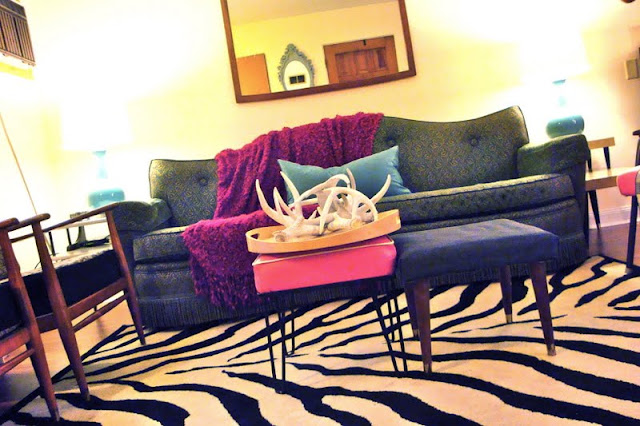 I was also nervous about having the sofa directly facing this: 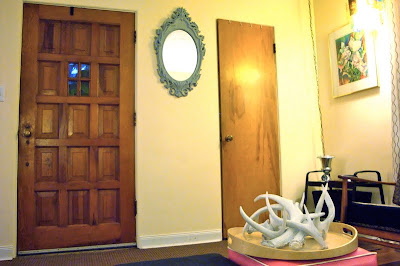 The front door and coat closet. But I can personally attest to the comfort, as I'm now sitting on the sofa, ankles crossed on the stool in front of me and typing this post on my laptop--that's in my lap. Go figure. :)
Facing the door: not at all awkward. In fact, it's quite cozy. 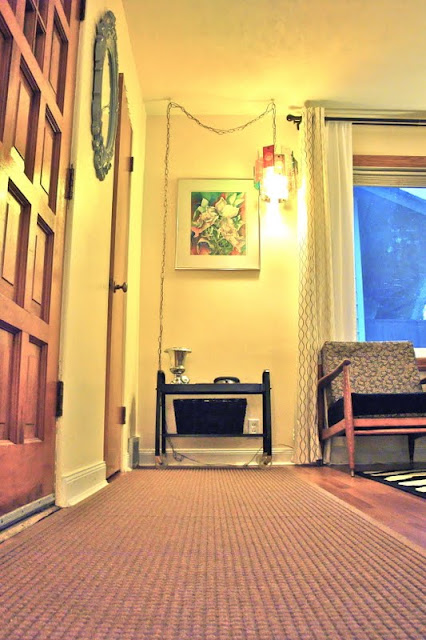 The entry area had a bit of a make-under. The too-wide headboard is replaced with a small stand we previously had in the coat closet. (Originally, it was a retro TV stand in my grandparents home.) 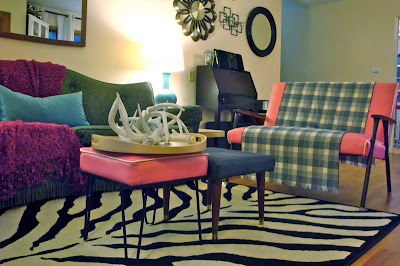 And, there are a couple "new" furniture pieces in the room. The mid-century pink love-seat and stool--with hairpin legs!!--were a BisManOnline find. And how I got them is quite a story. I'll share more another time, but for now, let me note that my very masculine husband allowed me to keep them in this room if I (1.) made the pink less obvious, and (2.) proved they were a useful addition.
Check. and. check. They stay.
Yay! 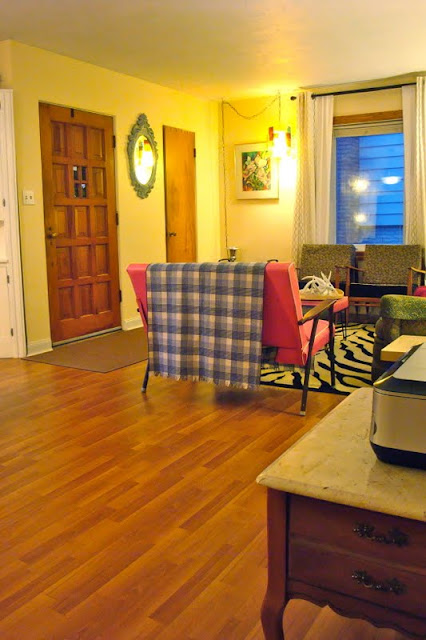 The layout makes better use of the space, creating a better flow. The main traffic pattern was formerly pushed around our sitting area. Not so any more. 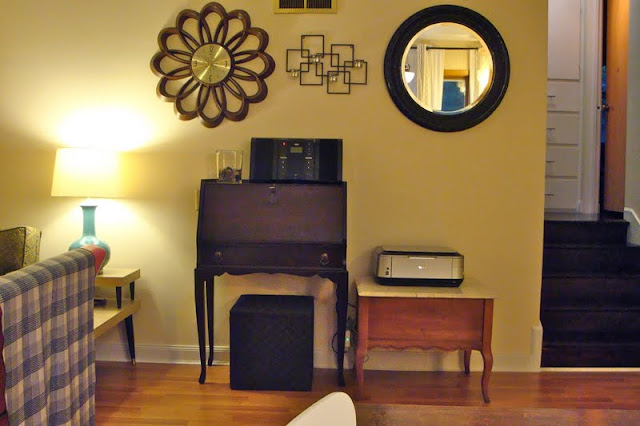 The location of the desk hasn't changed. The stereo and printer share an Apple Airport Express, making wireless printing and sound effortless. It's the perfect spot to pay bills and such.
I'm thinking of painting the retro clock and round mirror frame the same shade of smokey white, making them less obtrusive and more uniform. Haven't decided.
What do you think about the possible cohesive paint job? Yay or nay?
at 11:00 PM